In Part 11 we alluded to the fact that the colony may be in trouble as we found that the queen had died over winter, the colony, as we dreaded, eventually died off as there was nothing that we could have done, the queen hadn’t been replaced naturally, so with no laying queen there was no new bees. It took a few months but eventually all activity ceased just before Spring sprung.

Getting in touch with the local Bee community brought new contacts, keeping a close eye on swarming I offered my services as a novice to go out on any swarm captures that may take place and hopefully be able to bag myself a new colony. 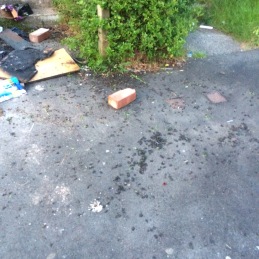 I was called out to meet a pest controller who had been called out due to kids setting fire to a swarm, when I arrived over half lay burnt and dying on the floor (clearly no parental discipline or education in schools).

I rescued what I could but the queen I am guessing was already killed. 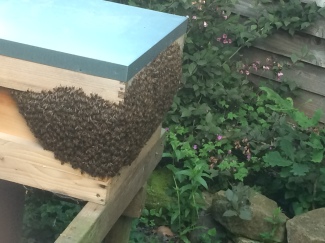 Some weeks later a captured swarm from one of the members of the group was offered and I gladly snapped them up. We amalgamated what was left of the rescued bees and settled them into the hive. The next morning they were grouped on the outside of the hive, at this point they are likely to abscond so I collected them up back into the hive and provided a syrup feed. That was two weeks ago, since then I have left them alone and so far there has been little external hive activity. Fingers crossed when I open up this weekend they will still be there!

The plan is to expand to two hives to ensure a complete loss is not going to happen in the future.

Stay tuned to see how the new bees are progressing.

Trying to live a preparedness lifestyle, developing new skills to help me strive for that better life. This will serve as a memoir for myself and my family, friends and anyone who is interested as we take this crooked path towards an infinite destination.
View all posts by Ian →
This entry was posted in Bee Keeping, Uncategorized and tagged apiary, bee feed, beekeeping, bees, Health, hive, hives. Bookmark the permalink.