Wow where has the time gone? firstly, sorry for those following this blog, I should have posted before now but, man, its been a busy year.

The bees are all doing well, I’ve carried out regular inspections and detailed these onto my hive record card and I have to say so far I haven’t been stung! no doubt that will change now I’ve mentioned it.

The bees have been very calm during inspections, the record card asks for a Temper judgement of 1 to 10 with a guide of 10 = Calm; 8 = Agitated; 6 = Sting & 4 = following. In all but one occasion I put down a 10, and on the last two inspections I used little to no smoke.

In my last post I was feeding the bees a 1:1 sugar / water syrup and I stopped feeding in late August and removed the rapid feeder.

At this time I also had to to a detailed inspection as I hadn’t spotted the queen for a few weeks and was starting to panic a little, this is quite common, certainly for the new

bee keeper (not finding the queen i mean, not the panicking!), this was a good opportunity to get some images of the Brood frames as shown. 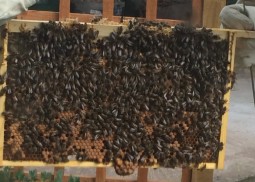 The  Queen was eventually found alive and well.

One of the things that I had failed to do was to use a piece of plastic Correx on the base board to stop the board from looking like the one in the image shown.

This is basically all of the hive waste, pollen, moisture, mites, insects, etc. that drop though the mesh floor. By studying this board gives you a reasonable idea of the hive condition at a glance. I clean this board off at each inspection and have now put a section of blue plastic Correx in there.

Up until last week I had seen no Varroa mites, whether it is because of the coloured base board that I can now see them clearer I’m not sure, however now like most hives I need to treat for Varroa. 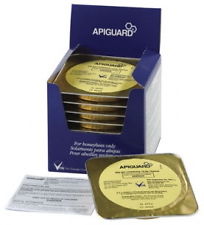 Its usual to remove the crops of honey during August, however I only had 4 frames in the super so chose to leave these for the bees to build on ready for winter. Typically after removal of the crop in August you would then treat for Varroa by using Varroacides and restrict the entrance to prevent other bees or wasps from robbing your hives. September would be the time to start feeding for the winter period, obviously supplementing the honey that you’ve stolen! Remove any Varroa treatment at end of treatment period. I am currently carrying out an emergency treatment for Varroa using Apiguard.

I have also fitted a mouse guard to restrict the entrance, this should also make it easier for the guard bees to do their job easier on inspection for intruders.

Earlier in the year I placed some trellis fencing around the apiary and planted some Plum and Raspberry, and inside some forage in the form of gooseberry, lavender, blackberry, these have all come on well and should provide them and us with some plentiful forage for the next year, as well as some protection against the elements once full established.

I will try to report on my winter set up once I get some guidance from my local club….

Trying to live a preparedness lifestyle, developing new skills to help me strive for that better life. This will serve as a memoir for myself and my family, friends and anyone who is interested as we take this crooked path towards an infinite destination.
View all posts by Ian →
This entry was posted in Bee Keeping and tagged apiary, Apiguard, beekeeping, bees, Brood, Varroa. Bookmark the permalink.